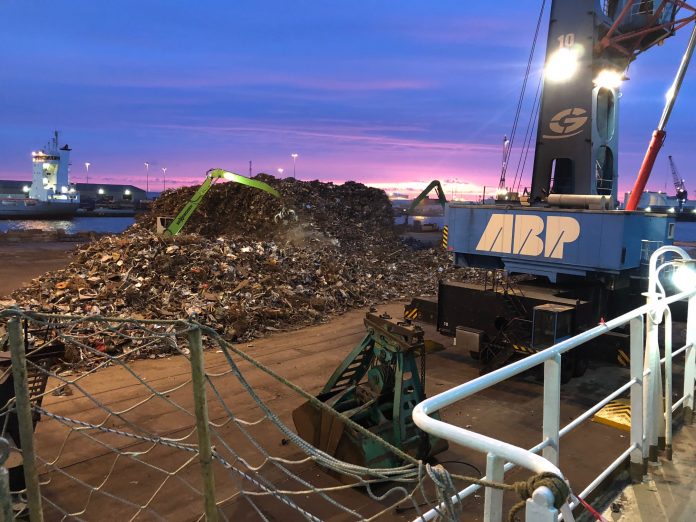 Derbyshire-based metal and waste management specialist, Ward, has exceeded its forecasted annual export target from its dedicated deep sea dock at Immingham in just seven months. The specialist metal recycler has exported over 50,000 tonnes of ferrous and no-ferrous metal since it opened the facility in April this year, at an estimated value of £7.6million.

Three ships left the dock in last month destined for Bilbao and Sestao Port in Spain and Iskenderun in Turkey, carrying a combined load of over 31,000 tonnes including plate iron and HMS 1 and 2 grade. The Ward team has been grading and processing the material whilst stock has been building at the site.

The largest of the three vessels, the Pochard S, measured 198 metres long 23.7m metres wide with six holds and six hatches. It sailed from Immingham and took 11 days to arrive at its destination, after loading 23,881 tonnes over six days loading 24 hours, a day through two shifts.

Thomas Ward, Commercial Manager at Ward, said: “This is a hugely significant milestone for us as we continue to utilise the port further. Results achieved so far have exceeded our initial estimates and we are continually improving tonnages of metals for export and import.

“The team is working incredibly hard with existing customers as well as exporting to new customers in destinations all over the world. In the next couple of months we’ve already got orders to export a further 20,000 tonnes in steel skulls, plate iron and obsolete steel scrap.”

Tess Egginton - 24th February 2020
Microbusinesses looking to boost productivity through technology, such as tracking customer behaviour, converting sales leads or making the most of social media, can access...

Time is running out – submit your entries for the East...

Region round-up: councils, investment bodies and LEPs back the 2020 East...