15 companies headquartered in the Midlands have made the league table including six new entrants. Three of the companies are based in the East Midlands.

These regional stars have grown their international sales by an average of 65% a year over the last two years to a total of £523m. Together they employ more than 15,000 people.

The region’s top-ranked company is Envisage Group (No.10), which designs and develops concept cars and new automotive technologies for customers including Bentley, Jaguar and Nissan. Projects for electric vehicles companies in California helped international sales grow an average of 148% per year over its last two years, to reach £4.7m in 2018, on total sales of £46.4m.

The companies in the Midlands appear alongside well-known British brands based across the UK including Mountain Warehouse, which opened 21 shops abroad last year; BrewDog, which was valued at £1bn in 2017 and now has nearly 100 bars worldwide; and Charlotte Tilbury Beauty, the London-based cosmetics and skincare brand, which ships to 76 markets.

International Track 200 star alumni include Skyscanner, Specsavers, Lush and Endava – which first featured on the league table in 2012 with exports of £3.6m, floated on the NYSE in 2018 and is now valued at more than $2.5bn.

The league table programme is sponsored by HSBC, DHL Express and Oracle NetSuite, and compiled by Fast Track, the Oxford-based research and networking events firm.

Amanda Murphy, Head of Commercial Banking, HSBC UK, said: “The Sunday Times International Track 200 shows the strength, ambition and resilience of companies across the UK and we are delighted to be sponsoring again this year.

“The six new entrants in the Midlands are making a significant contribution to employment, driving prosperity and growth and are the sort of businesses we are pleased to support every day.” 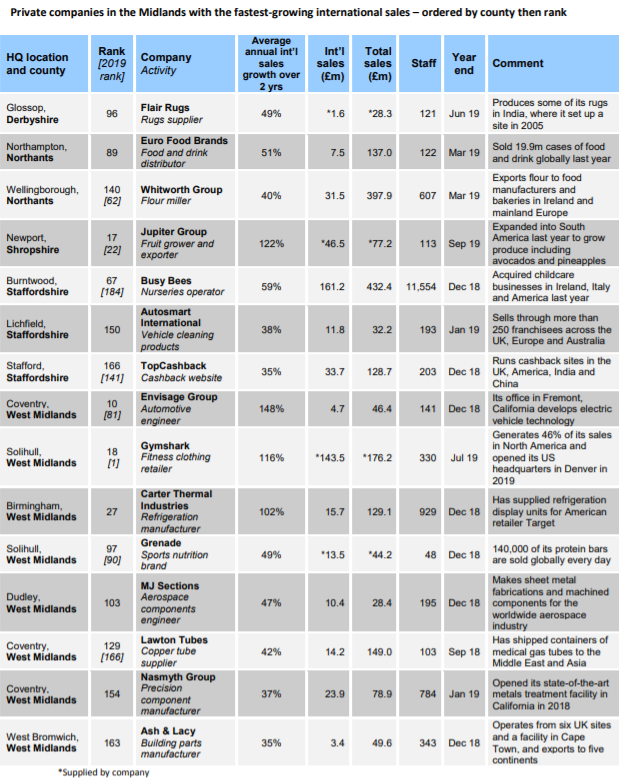 Tess Egginton - 21st February 2020
Ken Nettleship, Business Expansion Specialist at Invest in Nottingham, our host city's inward investment agency, has been announced as the guest speaker at this year's...

Bolster your green credentials with an LED printer: By Team Docuflow