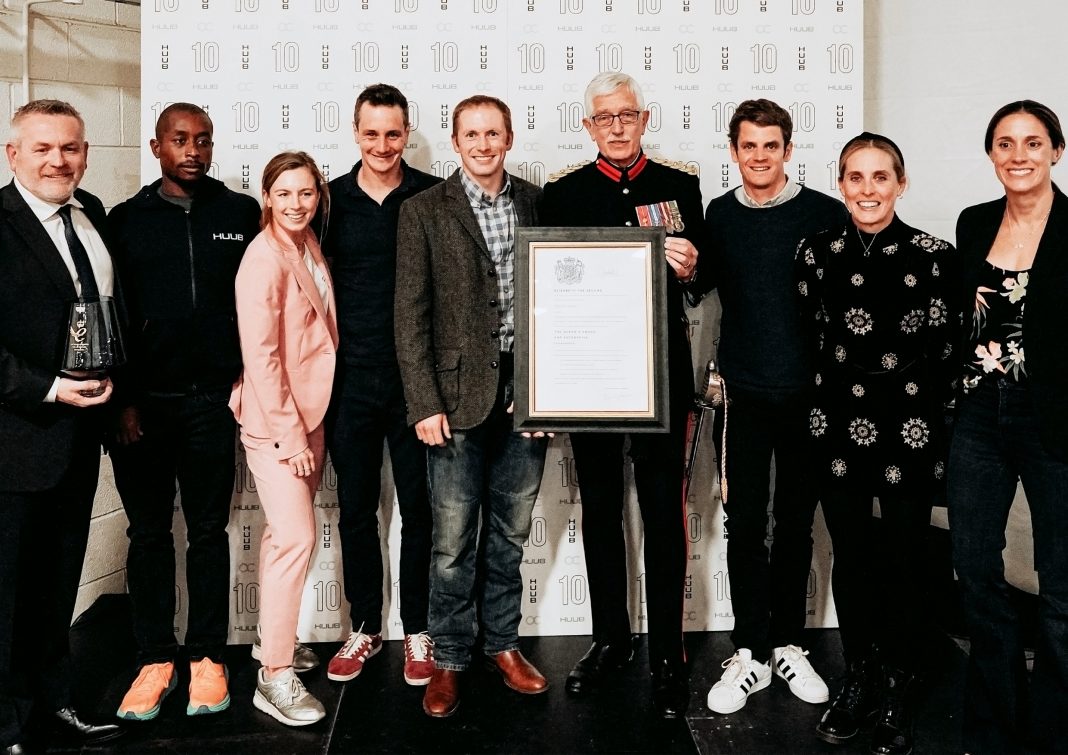 The company invited 400 guests to join the athletes in celebrating its first decade in business and were also joined by American cyclist Ashton Lambie and British paratriathlete George Peasgood, while the fourth member of Team GB’s Olympic-gold-medal-winning triathlon relay team, Alex Yee, joined the party by phone.

HUUB, which employs 25 people at its HQ in Full Street, was also presented with it Queens Award for Innovation from Derbyshire’s Vice Lord Lieutenant Colonel John Wilson, OBE.

Georgia Taylor-Brown, who also won an individual silver medal in Tokyo, said: “Working with HUUB has been thoroughly enjoyable – we all feel like one happy family. They are always willing to make any adjustments we think might aid our performance and we’re really happy to help them celebrate their big birthday.”

HUUB was founded by former Noel-Baker pupil Dean Jackson in 2011 with the aim of using technology and research in the design of its wetsuits to give athletes extra speed in the water.

Within two years the Brownlee brothers became brand ambassadors for HUUB and in 2014 more winners in the sport’s international series wore HUUB than any other brand.

Both brothers have worked with HUUB since the very early days and they paid tribute to the way in which the technology – and the company – have developed over the years.

Jonny said: “We have been a part of the journey from the start, when everything was done in Dean’s basement and he set out to make the fastest wetsuit in the world. So, it’s really good to see how the company has progressed to where it is today.”

Alistair added: “I really like the technology and science side of the sport, it’s something I’ve worked really hard to have an understanding of, and we’ve both enjoyed working with Dean and being a part of the development of the wetsuits over the years.

“It’s been cool to visit HUUB’s office in Derby during that time and see how the business and the shop has grown and we’re pleased to be here to celebrate its 10th anniversary.”

HUUB is now British triathlon’s Official Wetsuit and Swimwear Partner and all the medal-winning athletes at this year’s Tokyo games wore HUUB on their wetsuits, swimming gear and luggage.

Dean said: “It has been well documented that I started this company from my kitchen table and we have been on an incredible journey to get to this position.

“Working with elite athletes has been transformational for HUUB, these are some of the world’s greatest sportsmen and women so we have to be relentless in the scientific pursuit of increased performance.

“At the same time, our products are used by keep-fit enthusiasts and weekend amateur competitors and I’m really proud of that.

“Receiving the Queen’s Award is a pinch-me moment. It’s something you’d never imagine – especially when I was sat at my kitchen table setting up this business.

“The award is for all our team and every member of the HUUB family who constantly strive to be the very best in our field, believing that with innovation and experimentation we will always improve.”