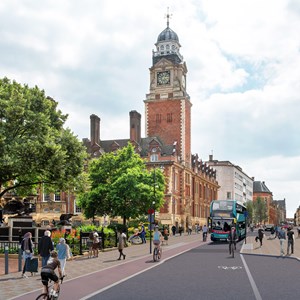 Plans for a major £4million revamp of three busy city centre streets have been revealed by Leicester City Council.

The city council is planning major improvements to Horsefair Street, Pocklingtons Walk nearby Market Place South (and a small linking section of Millstone Lane) as part of the Connecting Leicester project, which is improving routes through the city centre while making it more attractive to investors and developers.

On Horsefair Street, footpaths will be reconstructed with high-quality block paving and the realigned carriageway will be resurfaced. A new contraflow cycle track will be created to extend the network of safe cycle routes across the city centre.

As part of the revamp, a new footpath will be created into Town Hall Square. This will link directly to Dolphin Square, with a raised area across the carriageway to link the two areas of public realm.

These improvements will extend onto Pocklington’s Walk, where footpaths will be improved, and the carriageway realigned and resurfaced. A contraflow cycle track will provide a direct link from Horsefair Street to the new cycle lanes created on Welford Road, Newarke Street and Belvoir Street. A small number of Pay and Display parking bays will be introduced on Chancery Street to offset removal of parking on Pocklington’s Walk.

Nearby Market Place South will also be reconstructed and resurfaced, extending the improvements recently completed in Market Place.

Work to improve the pedestrian link at Dolphin Square will also be completed, with a high-quality resin-bonded gravel finish.

The improvements will be part-financed with up to £1.85 million from the European Regional Development Fund (ERDF), following the city council’s successful bid for over £6 million of funding to support a range of ambitious transport related projects that aim to cut greenhouse gas emissions.

City Mayor Peter Soulsby said: “It is vital that we continue to invest in the regeneration of this high-profile part of the city centre and continue to provide safe and attractive routes for cyclists and pedestrians.

“This major scheme will transform the look and feel of this part of the city centre, providing much improved facilities for all road users and creating a new direct link between Leicester’s popular market and the historic Town Hall Square.

“The award of almost £2million of ERDF support is a tremendous endorsement of what this scheme will help achieve.”

Work is due to get underway on the new Town Hall Square path in mid-February, with the main works due to begin in late-April.

6th April 2020
Boris Johnson has been moved to intensive care after his coronavirus symptoms "worsened", Downing Street has announced. The prime minister, who tested positive for coronavirus 10...