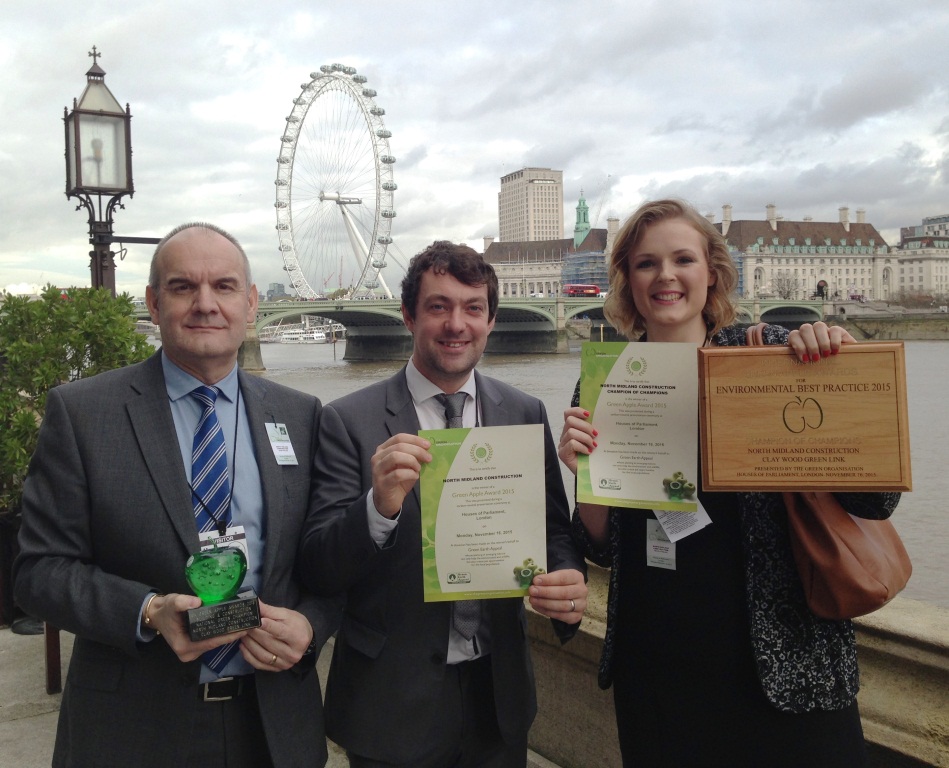 Nottinghamshire company North Midland Construction (NM Group), a major UK provider of civil engineering, building, mechanical and electrical services to public and private organisations, has scooped the top award in the International Green Apple Environmental Awards for a project in Sheffield, beating over 500 other entrants.

The group’s Highways and Utilities division was voted Champion of Champions and presented with their trophy at a prestigious event at the Houses of Parliament for their Clay Wood Green Link project for Sheffield City Council.  The project, to help regenerate the area, involved the transformation of a series of underused and isolated spaces in Sheffield into a green corridor and parkland.  The project was commissioned by the Council’s Parks Service, funded by its New Homes Bonus scheme and designed by the Council’s award-winning Landscape Team. Various innovations were explored during the course of the project to minimise the effect on the environment including recycling and reusing materials wherever possible. The project has also won an Royal Town Planning Institute Place Making Award.

The judges commented: “The Clay Wood area of Sheffield was home to an assortment of abandoned and derelict housing blocks which, once demolished, left an unsightly and unusable area in the heart of the city.

“North Midland Construction were contracted to revitalise this tract and create a pleasant green parkway with spectacular views over the city and a sustainable access route to serve walkers and cyclists travelling between the suburbs and the city centre including tram, bus and rail stations.

“The project made excellent use of any waste and arisings, either reusing them on site or sent for recycling, and the area is now a much improved habitat for residents and wildlife.”

Geoff Poyzer, managing director for the division commented: “I am thrilled to accept this award on behalf of our team for the Clay Hill Green Project.  We are so proud to be recognised for making such an improvement to a local area.”