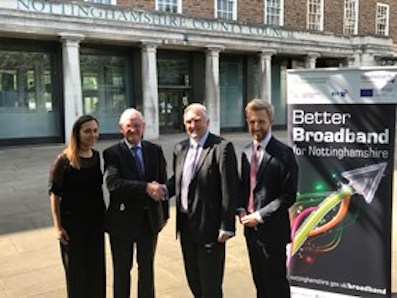 People living in some of the most rural parts of Nottinghamshire are set to benefit from a further £2.7 million boost to fibre broadband.

More than 2,500 homes and businesses in the Bassetlaw and Newark & Sherwood districts will be included in the next phase of the Better Broadband for Nottinghamshire (BBfN) scheme, after Nottinghamshire County Council awarded Openreach, Britain’s largest telephone and broadband network, a contract to deliver a third phase of work.

It will move Nottinghamshire closer to every home and business having access to broadband and further enhance the county’s position amongst the most digitally connected areas in the whole of the UK.

Around £30 million has been invested in Nottinghamshire’s digital infrastructure since the start of the BBfN roll out in 2014.

Phase three of BBfN will see a further £2.7m investment, including £1.3 million from Nottinghamshire County Council, the government’s BDUK broadband delivery programme and £1.4 million from Openreach.

The work will build on the 97.5 per cent of premises across the county that can already access faster broadband (speeds of 24 Mbps and above), thanks to the first two phases of the BBfN programme and Openreach’s own commercial rollout.

Councillor Reg Adair, Deputy Leader of Nottinghamshire County Council, said: “Our latest investment in the county’s digital infrastructure will see Nottinghamshire pushing towards 100% broadband coverage, which is great news for residents, businesses and the local economy.

“More than 50 per cent of homes and businesses in the areas where we have rolled out our scheme have already signed up for faster broadband, which clearly shows demand is there.

“Broadband plays such a huge part in our lives these days, so good availability is one of the top priorities for people looking to buy a home, start a business or invest in an area. Nottinghamshire is already amongst the best areas for availability in the country and our on-going investment keeps us ahead of the rest.”

Detailed planning and survey work for phase three will get underway shortly, with the roll out expected to begin in Spring 2019 and take around six months to complete.

And there’s further good news for the 2,500 properties included, with Openreach looking to use Full Fibre technology for this third contract in Nottinghamshire, meaning ultrafast speeds of up to 330 Mbps – around ten times quicker than the current UK average – available to all 2,500 premises.

Steve Henderson, Openreach’s regional director for next generation access, said: “Our work in Nottinghamshire is making a huge impact throughout rural communities. We’ve already reached close to 74,000 premises through our work with the county council, and we’re looking forward to going even further with this new contract. We know it’s important for people to be connected to faster broadband, and Openreach’s expertise, as well as being able to provide residents with the choice of internet service providers, is good news all round for the people of Nottinghamshire.”

Work carried out as part of the Better Broadband for Nottinghamshire programme is in addition to Openreach’s own commercial rollout in the county.

Openreach provides the telephone and broadband network used by the likes of BT, Sky and Talktalk. So in Nottinghamshire, this means residents and business owners will still be able to choose from a wide range of broadband deals – they are not restricted to just one supplier.

Openreach recently launched an ambitious ‘Fibre First’ programme that aims to reach three million front doors across the UK by the end of 2020, with an ambition to extend this to around 10 million premises by the mid-2020s, and ultimately, with the right conditions to invest, to the majority of homes and businesses across Britain. You can find out more at openreach.co.uk/ultrafast