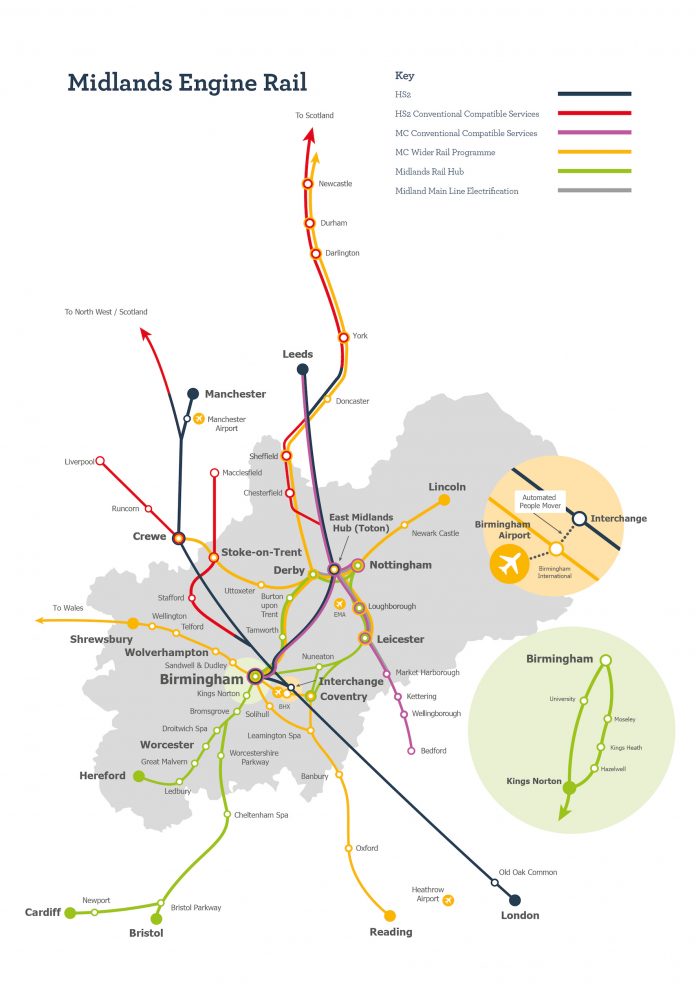 Dozens of towns and cities across the UK could benefit from Midlands Engine Rail, a £3.5 billion improvement programme to transform the region’s rail network, launched today by Sub-national Transport Body Midlands Connect.

Made up of seven projects spanning the East and West Midlands, the programme is “strategically-important in supercharging the Midlands Engine economy and is designed to drive sustainability, productivity and social mobility across the whole region.” It also includes and builds upon the flagship Midlands Rail Hub scheme; aimed at boosting east-west connectivity, which was submitted to Government in June 2019.

Set to be delivered in stages from 2022 to the completion of HS2 Phase Two, Midlands Engine Rail will provide a capacity boost for national, local and regional rail services, creating space for 736 more passenger trains on the network each day. Over the past two years, rail passenger numbers have risen faster in the Midlands than anywhere else in the UK.

Due to the Midlands’ central position at the heart of the UK transport network, the programme is also nationally-significant, driving benefits as far afield as Cardiff, Bristol, Newcastle, Kettering and Sheffield.

Improvements will increase the speed and frequency of existing services as well as introducing new direct services; for example, linking Leicester to the cities of Leeds and Coventry. It is also designed to reduce carbon emissions and encourage both passengers and freight off the roads and onto the railways.

Civic and business leaders are now calling on Prime Minister Boris Johnson to back Midlands Engine Rail, fund the next stage of its development (£45.5 million over the next three years), and to display the same enthusiasm for infrastructure investment in the Midlands as he has in the North.

Sir John Peace, chair of Midlands Connect and Midlands Engine said: “In the Midlands, more people are travelling on the railways than ever before. We now need investment from Government to allow our people, businesses and infrastructure to reach their full potential, and to drive a further boost in passenger numbers. Midlands Engine Rail is essential in creating a more sustainable, productive and mobile Midlands.

“Whether they live in Shrewsbury, Lincoln, Birmingham or Leicester, our communities deserve the opportunity to make greener choices, to access a world-class education and to reach the widest possible variety of career opportunities. We must create a transport network that helps our businesses to grow, not holds them back”

“My message to the Prime Minister is clear; it’s time you made a long-overdue commitment to the future of our rail network. Ten million Midlanders are counting on you; invest in their futures, turn our vision into reality, back Midlands Engine Rail.”

Robert Nisbet, director of nations & regions at the Rail Delivery Group, which represents rail companies, said: “Millions of train journeys are made in the Midlands every week and rail companies are working together to improve services, with new and refurbished trains being introduced to run more services. Further investment as part of Midlands Engine Rail will improve journeys for passengers between towns and cities across the region and power economic growth by unlocking new business opportunities.”

Darren Reed, Managing Director for Rail at WSP, said: “We welcome the Midlands Engine Rail programme, a series of clever interventions put forward by Midlands Connect that have the potential to not only improve journeys for passengers, but deliver major social and economic benefits.

“Recognising that the Midlands is at the heart of the UK’s transport network, the plans highlight the region’s clear commitment to growth and unlocking the benefits of HS2, addressing East-West connectivity and delivering future-ready, sustainable rail services.

“WSP is already working closely with partners including Midlands Connect to enable transformative investment in transport across the Midlands such as HS2, as well as international gateways and hubs. We’re fully behind any initiatives that bring integrated transport outcomes and improved connectivity leading to greater long-term benefits for the region, and the wider UK.”