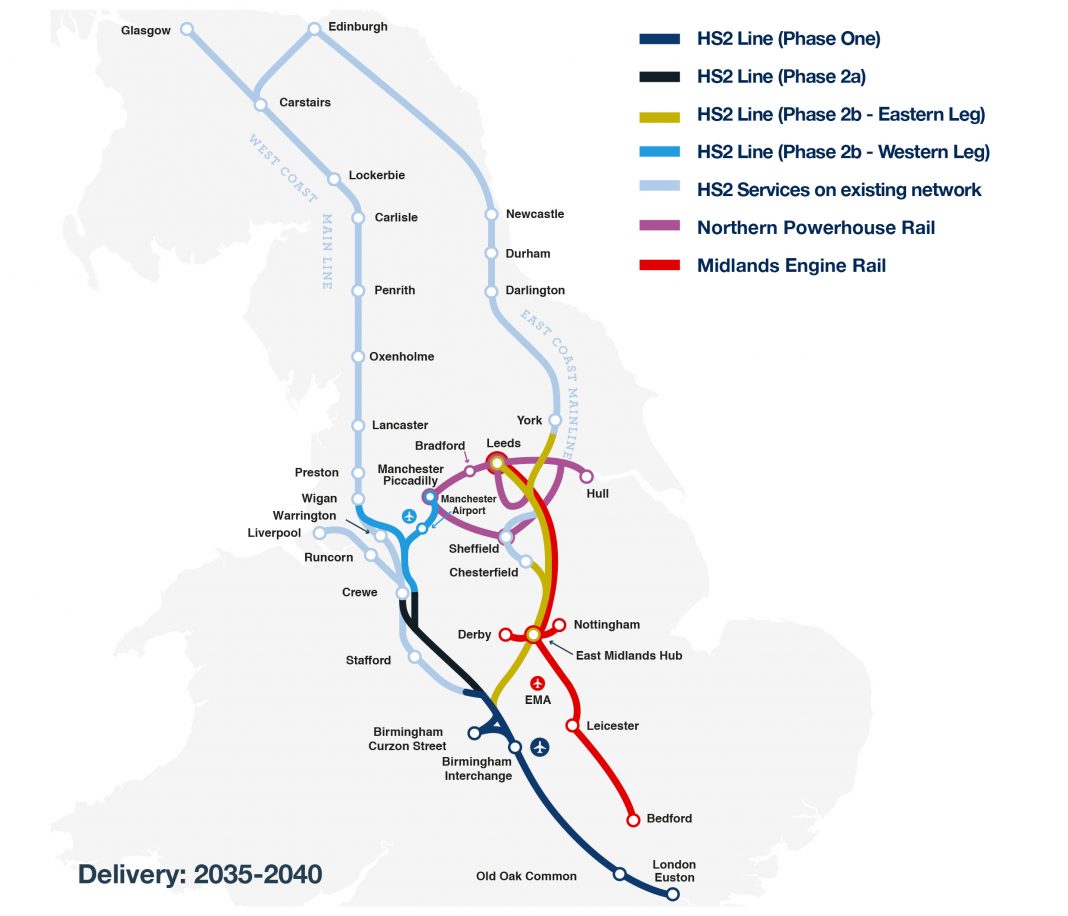 Leaders from along HS2’s Eastern Leg have written to the Prime Minister, urging him to deliver both the local improvements and national connectivity which they say are needed to level-up the UK economy, and spearhead economic recovery post-pandemic.

In the letter, the leaders of the Connecting Britain campaign – a coalition of Mayoral combined authorities, local authorities and businesses – say they are writing to make the positive case for why the North, the Midlands and UK Plc need the Eastern leg of HS2 2b in full as an integral part of High Speed North.

They say: “The substandard options set out in the Rail Needs Assessment (RNA) publication from the National Infrastructure Commission (NIC) completely failed to achieve the remit you set for them; to set out how major projects in the North and Midlands – including northern parts of HS2, Northern Powerhouse Rail (NPR), Midlands Engine Rail (MER) and trans-Pennine upgrades – can be fully delivered.

“We wholeheartedly reject that report and urge the Government to do the same. The NIC report is not fit for purpose – they were tasked with integrating these projects, not pitting them against each other. Your challenge in February to the NIC was for them to work out how to integrate major projects both North-South and East-West, not force the North and Midlands to choose between them.

“The options presented in the RNA would seriously inhibit economic growth and rebalancing, including stopping the Eastern leg at East Midlands Parkway rather than have it continue on to Toton, Sheffield and Leeds. This would be a devastating outcome for those cities and communities, and an abandonment of the levelling up agenda the government has committed to.

“The RNA ignores the ambitious and compelling growth strategies developed by the North and Midlands, and the economic analysis underpinning the RNA’s report is based on flawed assumptions which bias investment towards the wealthiest parts of the country- flaws which the Government rightly recognises in its recent reform of the Green Book.

“On the best outcome for the Eastern leg of HS2, our coalition is clear. We are calling on the government in the forthcoming Integrated Rail Plan (IRP) to confirm a clear timescale that honours your commitment and sets out when the Eastern leg will be delivered in full and at pace, to allow for our cities and towns to have certainty around their growth strategies and long-term economic planning. Each year of delay costs the North and Midlands £4.9bn. We need to see the hybrid bills for HS2 East in Parliament by 2023, and work can also begin on sections that do not require legislation.

“The North and Midlands stand ready to work with government to review the current delivery arrangements for HS2 to ensure the most effective integration between the Eastern leg in full with NPR, MER and related upgrades.

“We are calling for the establishment of an arms-length delivery body for High Speed North and Midlands, to ensure the best engineering solutions for those areas, full value for money and the greatest potential for the economic rebalancing this country so badly needs.

“Working closely with private sector delivery partners and Network Rail within a financial envelope set by the Treasury and civic leaders will be key to addressing some of the challenges government faces in building new rail lines cost effectively, while maximising the full impact of Northern and Midlands rail projects for the benefit of people who live there and for the UK economy.

“Levelling up is an ambitious objective, and one that can make a real difference to the economies of the North and Midlands, as well as the quality of life and employment opportunities for people who live there. The commitment to deliver the northern parts of HS2 in full is the first test of the reality of the levelling up agenda. Going back on this commitment would see levelling up fall at the first hurdle, and would make a vision of a balanced, fair country for everyone impossible to deliver.”

The letter highlights the following as benefits of delivering the Eastern leg in full as part of an integrated network: