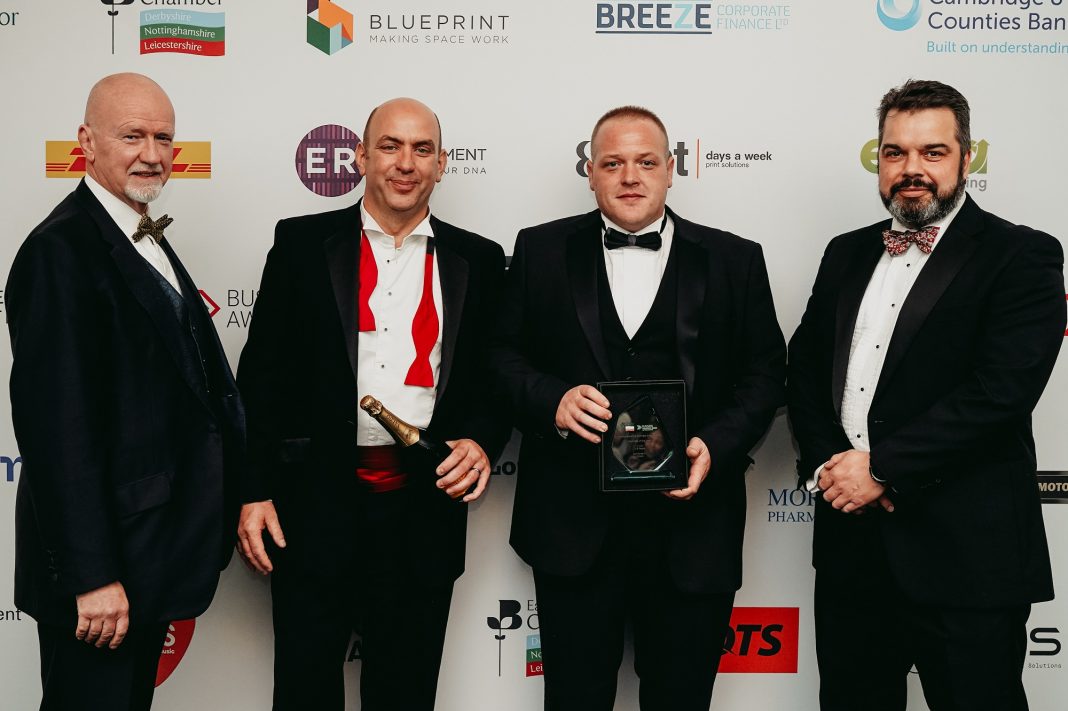 JG Pears, a family business that has become one of the UK’s largest sustainable processors of animal by-products and food waste, has been crowned the Nottinghamshire Business of the Year by East Midlands Chamber.

The company, whose factory just outside Newark has been behind cutting-edge techniques that recycle resources otherwise destined for landfill and produce sustainable animal feed ingredients, also won the Environmental Impact Award at the Nottinghamshire Business Awards.

A key proponent of the circular economy – a resource management system that enables materials and products to be constantly reused so waste is minimised – JG Pears has also developed a net zero co-incineration plant powered by renewable biomass generated from animal by-products.

It is also a successful exporter, with its animal fats shipped globally to countries including the USA, South Africa, Vietnam, Chile and Myanmar, where they are used in pharmaceuticals, waxes and biodiesel, as well as high-quality, protein-rich feeds for the pet food and fish aquaculture markets.

The Nottinghamshire Business Awards, held in partnership with headline sponsor Mazars, recognised winners across 13 categories, ranging from Business Improvement Through Technology and Environmental Impact Award within an organisation to individual honours for Entrepreneur of the Year and Apprentice of the Year. There were new categories this year for Collaboration Project of the Year and Excellence in Innovation.

Finalists, chosen by a judging panel of the Chamber’s senior leadership and board of directors, as well as sponsors, discovered their fate during a gala dinner attended by hundreds of people at Colwick Hall – marking a return for face-to-face celebrations after being held virtually last year.

Scott Knowles, chief executive of East Midlands Chamber, said: “There has been so much to celebrate within our business community despite a challenging 18 months and these awards have showcased some of the incredible companies that call our region home.

“As the economic recovery continues, and opportunities present themselves in a new era of global trade and sustainable business, these are just the kinds of organisations we should be highlighting when we’re shouting about everything the East Midlands has to offer. We know it’s a great place to do business and they are living proof.

“We received so many high-calibre applications, which demonstrated how the pandemic hasn’t been a period in which we have just stood still. Instead, the time afforded for reflection has led to many companies seeking out new opportunities, innovating and driving themselves forward.

“While last year offered us a different kind of experience in a virtual awards ceremony, it was great to be back holding such a landmark event for the Nottinghamshire business calendar in person once more. Once again, we are so thankful to our sponsors for making this event so successful.”

The Nottinghamshire Business Awards – one of three awards hosted by the Chamber, along with Derbyshire and Leicestershire – were hosted by British-Gambian broadcast journalist Haddy Ndure and featured entertainment by Red Lane.

Eileen, who owns Leicester-based ER Recruitment, gave a speech in which she spoke about the economic potential of the Broadmarsh and Island Quarter – two of the largest city centre regeneration sites in the UK – as well as the recently-reopened Nottingham Castle and ongoing project to repurpose the Ratcliffe-on-Soar Power Station.

Commenting on the awards, she added: “During my year as president, I’ve been privileged to witness some of the amazing success stories that don’t always receive the wider recognition they ought to, so I’m thrilled to see some of these come to the fore at the Chamber’s Business Awards.

“The Nottinghamshire Business Awards has shone the spotlight on some well-deserving winners but I’d also like to congratulate the finalists for their outstanding entries too as we had some really strong competition across many categories this year.

“JG Pears is a very worthy winner of the Nottinghamshire Business of the Year and is playing a critically important role in promoting the circular economy to make its products sustainable and drastically reduce waste – an issue that has really come to the fore in recent weeks during COP26. It’s also a big exporter and exactly the type of company our region should get behind.”