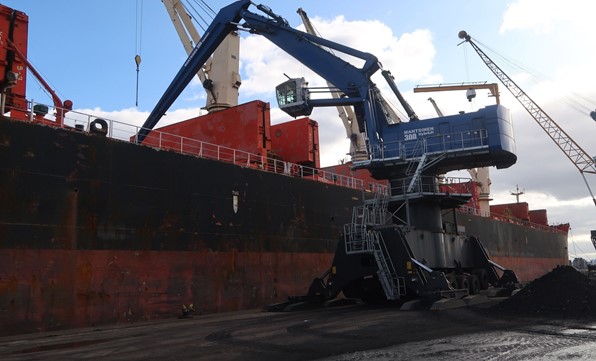 The world’s largest hydraulic crane is heading to the port of Immingham in a £3 million investment by Associated British Ports (ABP).

In their early years, the forerunners of today’s 300M were material handlers and have become popular with UK ports for their speed of operation. They have historically however been ‘small cranes for small vessels,’ an ideology that Mantsinen blew away with their 200 series machines in 2008 and the launch of the 300 in 2018. These super-sized machines now have the reach and capacity to serve panamax size vessels and can handle as much as 1500 tonnes per hour – far greater than the rope crane equivalents.

Simon Bird, Regional Director for ABP Humber said: “Our investment in buying the world’s largest hydraulic crane shows our commitment to ensuring we have the best plant and equipment on the ports to service our customers’ needs. We’re also thrilled to be the first company in Great Britain to have this giant on our port’.”

ABP already operate a fleet of smaller Mantsinen machines across its network of 21 ports, but this will be the first 300 in the fleet and the first delivery into England – Cooper’s first being delivered to Belfast Harbour in 2019.

The machine weighs in at 365 tonnes (without attachment) and is diesel powered by an EU stage 5 Volvo 16 litre diesel engine. ABP have opted for an 18.5m curved boom and 14m stick and the machine has a wheeled undercarriage of 6 axles with 4 wheels per axle. The machine will also come supplied with Mantsinen’s cab riser to enable the operator to position the cab in the optimum position over the hold to gain a direct line of sight. The machine also is supplied with a range of automatic and semi-automatic attachments that also reduce the need for direct labour in the holds thus enhancing safety further than if stevedores were slinging.

David Cooper, Executive Director of Cooper Specialised Handling said: “ABP have enjoyed high uptime and operational performance with their Mantsinen fleet since 2016, and we are thrilled that ABP have opted for the biggest of them all. It seems quite appropriate that the UK’s largest port by tonnage should invest in a machine that can handle the most tonnage per hour”

The new machine is anticipated to arrive as a complete unit in Immingham in April on a direct shipment from Finland together with two 95ER machines destined for Ipswich.