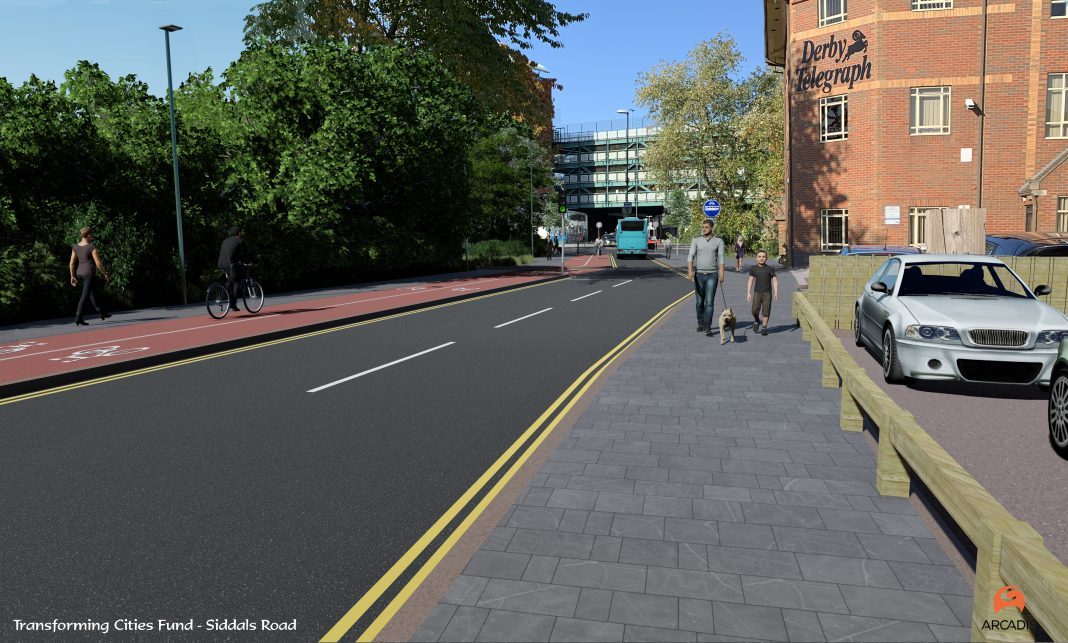 Derby City Council, in conjunction with Nottingham City Council, has submitted a bid for £100m from the second phase of the Transforming Cities Fund.

The fund is designed to improve connections between major employment sites and promote active travel and public transport.

The Council has revealed its ambitions including the establishment of Derby’s first dedicated mass transit link, with the provision of a high quality electric Rapid Transit (eRT) route that would run directly across the city centre, linking key intra-city destinations and public areas. The eRT route would be a key investment in revitalizing the public transport offer in the city, providing a new service and experience, which would include extensive, traffic-free routing.

In addition, three new ‘smart’ park and ride hubs with improved cycling and public transport links, upgraded RTI and waiting and electricity charging facilities, are proposed, as well as a demand responsive transport service, which would link the city centre and rail station to key employment sites including Rolls Royce, Bombardier and Pride Park.

Other improvements in the bid included:

The bid also includes initiatives to better connect Derby and Nottingham and East Midlands airport, including:

Councillor Matthew Holmes, Deputy Leader and Cabinet Member for Planning, Regeneration and Transport said: “The Council has been determined to make this a truly ambitious bid, demonstrating that Derby is ready to transform transport across the City area and enhance the links between Derby and Nottingham.

“The economic benefits will be huge for both cities because this level of investment offers the chance to implement some really exciting changes, bringing mass transit to the city, and creating public transport innovations and transport experiences.

“A key part of the proposals, for example, is a dramatic expansion of sustainable travel options. These include a network of cycle lanes and an improved environment to encourage walking.

“The overarching ambition is to radically improve the connections between where people live and work, and provide better access to employment and training. As part of our commitment to clear air, we have also designed our programme to deliver significant reductions in emissions, encourage a more active and healthier population, and to support inward investment and regeneration projects.”