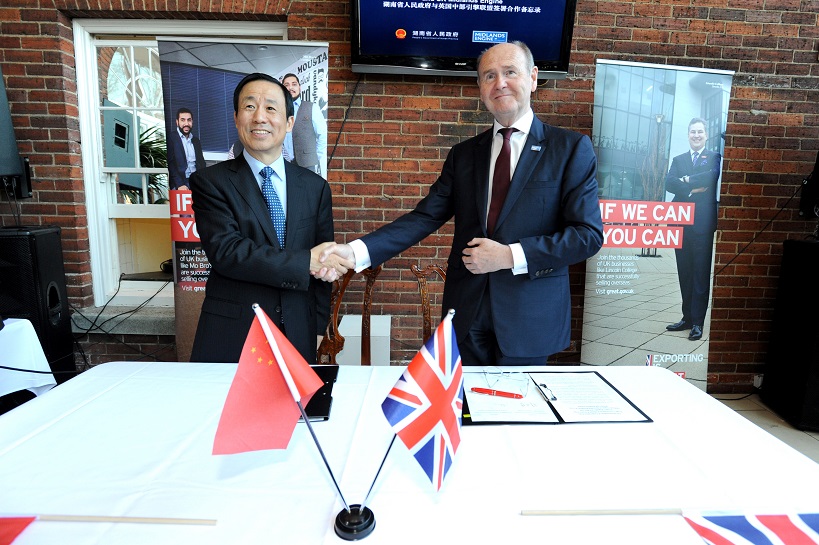 The agreement comes after a formal Lincolnshire-Hunan Sister Region agreement signing in 2018, amidst a growing relationship in trade, and people-to-people and political exchanges. Hunan is China’s seventh most populous province with a population of over 68 million, on a par with the UK and France, and with a GDP that would place it as the 23rd largest globally if it were a country – offering up enormous potential for collaboration and partnership.

The agreement will support opportunities for the Midland’s Engine and Hunan’s industrial and high-tech zones to work together.

It will support UK companies looking to access markets in Hunan, and open pathways for investment into the country in sectors such as advanced manufacturing, automotive, agri-tech, and life sciences, underpinning the UK government’s modern Industrial Strategy.

As part of the visit, Governor Xu met with Her Royal Highness Princess Anne – who had visited Hunan in 2017 – in London, and visited the British Museum to discuss cultural collaboration.

Minister of State for Trade and Export Promotion Baroness Fairhead and Governor Xu jointly opened the Hunan-UK ‘Future Innovation’ Conference in London. Baroness Fairhead highlighted the benefits and depth of the UK-China relationship.

In Lincolnshire, Governor Xu was welcomed to RAF Scampton, where he experienced the UK’s world famous aeronautical expertise by meeting and watching the Red Arrows train – the first time for a Chinese leader in the UK.

In 2018 annual UK-Hunan bilateral trade increased to over £500m. At the China International Import Expo (CIIE) in Shanghai in November, three UK companies signed agreements to export to Hunan worth a total of £33.2m.

A business that has seen the benefits of the Hunan-Midlands relationship include a specialist horticultural fertiliser manufacturer based in Lincoln, Hotifeeds, which signed a deal with ISKY Chemicals Co Ltd during the visit. The two businesses were initially matched at an event led by Department for International Trade (DIT), working with the South China Outreach team prior to the CIIE in 2018.

DIT Midlands are looking to leverage the successful civic relationships between Midlands counties and Chinese provinces, to build on a mission led by Sir John Peace in November 2018, and to build more individual connections between Chinese and Midlands companies and individuals prior to and after trade missions.

“We have a team of DIT International Trade Advisers working across the Midlands who provide expert support and advice for businesses from all sectors about exporting and how it can lead to significant business growth.”

Leader of Lincolnshire County Council, Councillor Martin Hill, said: “Lincolnshire has hosted delegations from the Hunan province since 2015, leading to us become formal ‘sister regions’ at the end of last year. Our relationship gives Lincolnshire much greater access to one of the largest and most important export markets in the world with huge potential for economic growth.”

Chairman of the Midlands Engine, Sir John Peace said: “I am delighted to have signed this agreement which will further support the UK’s industrial strategy, open new pathways for investment into the Midlands and support Midlands businesses to access new markets in Hunan.

“The Midlands Engine China strategy has identified a number of areas providing high growth opportunities and the Hunan Province is one of huge strategic importance. Strong relationships have already been built with Lincolnshire, with the signing of the deal between ISKY Chemicals and Hortifeeds being another clear demonstration of this. I am confident that we can now bring about further similar successes across the entire Midlands region.”