Five companies from the Midlands have won a place on the league table of Britain’s fastest-growing tech firms.

The five companies headquartered in the Midlands (compared to three last year) have grown their sales by an average of 91% a year over three years to a total of £100m, and together they now employ 570 people.

The five companies include three new entrants to the table. Among them is Nottingham-based UNiDAYS, which can instantly verify students for retail brands using its technology. It says its website and mobile app are used by 10m students worldwide, to access brands including Apple, Asos, Virgin and McDonald’s. Sales hit £27.4m in 2018.

Also featuring for the first time this year is Solihull’s Biosite Systems, which has more than 200,000 UK construction workers registered on its workforce management systems. Over 1,000 construction sites in the UK have used its technology, including its biometric fingerprint recognition system, helping sales hit £6.4m in 2017.

Past stars range from travel search engine Skyscanner, which was bought by Ctrip, China’s largest travel company, for £1.4bn in 2016, to listed takeaway website Just Eat, now worth £5bn.

The Tech Track 100 is sponsored by Hiscox, Barclays, BDO, BGF and N+1 Singer, and compiled by Fast Track, the Oxford-based research and networking events firm.

Steve McGerr, head of direct commercial at Hiscox Insurance UK, said: “Tech businesses in the Midlands are thriving thanks to the fearlessness and determination of those that run them. We have great admiration for the talented entrepreneurs that make up the companies on this year’s Tech Track 100.” 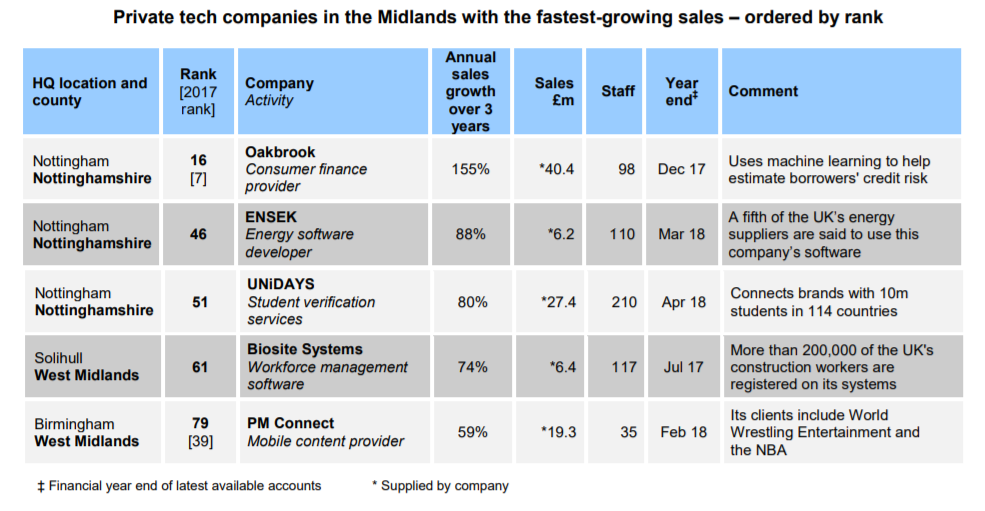 The national picture
This year’s Tech Track 100 companies achieved average sales growth over three years of 101% a year to a combined total of £3.3bn. They employ 19,300 staff, having added 14,000 employees to their combined workforce over the period.

London is the most popular location for company headquarters with 58, followed by the northwest (11). Of the remainder, seven companies are based in the southeast, six in the northeast, five in the East, five in the Midlands, three in Wales, two each in Scotland and the southwest, and one in Northern Ireland.