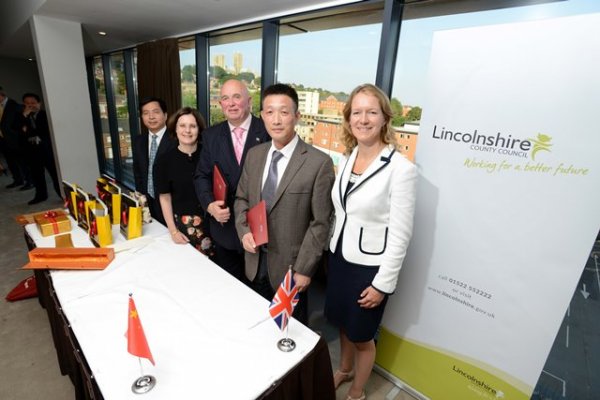 Lincolnshire County Council has signed a declaration of friendship and economic co-operation with a booming Chinese province.
A delegation from Hunan, one of China’s fastest-growing provinces, has been in the county for two days. As well as visiting the Collection and Lincoln Castle, delegates have had tours and talks at county businesses and the University of Lincoln’s engineering school.The visit aims to foster mutual understanding, friendship and co-operation between the two regions, with a formal declaration signed to promote common prosperity and development.

Councillor Colin Davie, executive member for economic dvelopment, said: “The delegation have been very impressed with what they’ve seen and I believe this is the beginning of a long and prosperous relationship between our two areas.”

“China has become one of the largest and most important export markets in the world, and many county firms already have ties there.”

At the signing of the agreement, Mr Shi Shaolong from the delegation said:”We have learnt a lot from our journey. We have many things in common including our long histories, and the agriculture and tourism industries. We think we can collaborate really well. We will go back to report to our government about our friendship and we really look forward to welcoming people from Lincolnshire to the Hunan province.”

Hunan is home to more than 65m people, and its economy is worth more than £200bn per year. Traditionally a rice and cotton growing area, Hunan has been developing its machinery, steel, tobacco and food processing, and electronics sectors, as well as new creative industries, such as broadcasting and motion pictures.Some of the sectors that are earmarked for future collaboration are agriculture, engineering, adult social care, culture and education.