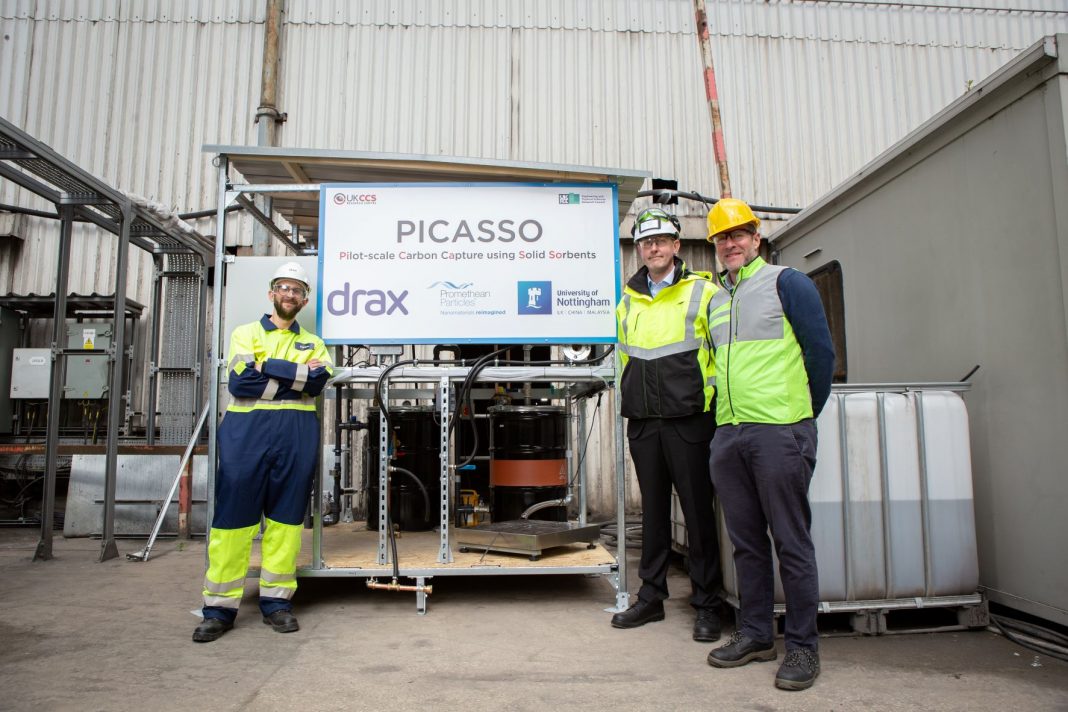 Renewable energy pioneer Drax has partnered with the University of Nottingham and Promethean Particles to trial a pioneering new bioenergy with carbon capture and storage (BECCS) process at its North Yorkshire power station.

The new process uses a type of solid sorbent called metal-organic frameworks (MOFs), which Promethean Particles are a global pioneer in the development and deployment of, to capture the CO2 released when sustainable biomass is used to generate electricity. CCS technologies typically use liquid solvents.

MOFs have a simple structure, which means they can be tailored to separate and soak up specific molecules making them excellent for CCS.

The trial will last for two months and will allow all three organisations to understand if this new carbon capture process performs well in real conditions on large-scale projects.

Jason Shipstone, Drax’s chief innovation officer, said: “Negative emissions technologies like BECCS will play a vital role in the fight against the climate crisis, so it’s crucial we continue to innovate and develop new technologies that will support their future deployment.

“This partnership with the University of Nottingham and Promethean Particles is part of our long-term innovation programme and will allow Drax to understand the future potential of this technology, as we continue to innovate and grow as a business.”

Professor Ed Lester, project lead, University of Nottingham, said: “This is a fantastic opportunity to showcase how these solid adsorbents perform in an industrial setting. We know that this project is gathering a lot of interest across many industrial sectors that currently generate large amounts of CO2.”

James Stephenson, CEO of Promethean Particles, said: “There is exciting potential for MOFS to deliver a more efficient CCS. By collaborating with Drax and the Uni, we can show how they can perform in a real industrial setting and drive a step change in their availability and cost effectiveness.”

Drax Group, which has converted Drax Power Station in North Yorkshire to use sustainable biomass instead of coal to become the UK’s largest renewable generator, plans to deploy the essential negative emissions technology BECCS in the 2020s. This would be the world’s largest carbon capture power project, delivering a significant proportion of the negative emissions needed for the UK to meet its climate targets.