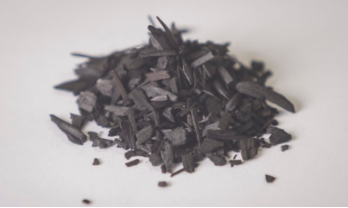 The University of Nottingham is to lead the world’s largest trial to evaluate the viability of a material called biochar to store carbon from the atmosphere to counter the impact of climate change.

The £4.5m project is one of five UK Research and Innovation-funded demonstrators investigating the adoption of Greenhouse Gas Removal (GGR) technologies to cut CO2 emissions at a scale that may help the UK reach its net-zero target by 2050.

Work on the 4-and-a-half-year project began on 1 May 2021 and field trials will be conducted at arable and grassland sites in the Midlands and Wales, as well as former mines, railway embankments where engineering work has resulted in loss of vegetation, and woodlands across England and Wales.

Biochar is a charcoal-like substance, produced by heating organic biomass from agriculture and forestry waste in the absence of oxygen (pyrolysis) to make it carbon-rich and chemically-stable. At present, in the UK, it is produced on an extremely small-scale in kilns and it is mainly sold as a mulch for horticulture.

Compared to commercial-grade charcoal we use on BBQs, biochar is similar but, ideally, should be produced at higher temperatures to produce carbon that will be stable over hundreds of years. However, its effectiveness, cost, social acceptability and limitations need to be better understood and proven at scale.

The UK currently imports over 90 per cent of the 100,000 tonnes of charcoal used domestically, but production needs to be increased to a scale of millions of tonnes per annum to make a significant contribution to support government net zero emission targets by 2050. Therefore, Britain would need to invest in multiple large-scale plants which would not only produce the biochar, but the gases generated in the charring process can be used to provide renewable heat and power.

As project lead, Professor Colin Snape, Director of the Nottingham’s EPSRC Centre of Doctoral Training in Carbon capture and Storage and Cleaner Fossil Energy explains: “40 per cent of carbon goes into the biochar and 60 per cent is converted into heat and power which is recovered in a large-scale plant. It’s a very energy-efficient, carbon neutral system.”

The research team will take a “technology-neutral” stance and evaluate both the carbon storage and economic performance of biochar as a GGR technology to inform policy-makers with their findings.

Small field-plot trials will then investigate the interplay between biochars (applied at different rates); fertiliser, soil health and plant and microbial responses. The application combinations and rates that elicit the most positive results will be selected and used at the demonstrator sites to ascertain if responses are replicable at scale.

The researchers will be adding the safe maximum of a few tonnes per hectare in a number of settings – arable, grassland and forestry – to understand the impact this soil amendment may have on plant-life and the soil ecosystem.

One-hectare permanent plots will be established on 10 working farms across the Midlands which are engaged in the project’s field work. On each plot, biochar will be applied on half the field with the other half left untouched to study any notable variations in the soil.

Biochar will also be incorporated in soil prior to tree planting at several nursery woodlands and spread on the surface in other mature forest locations. Additionally, biochar will be used on sites where the land is contaminated with heavy metals from prior industrial use. Biochar acts as an adsorbent, binding metal pollutants to its surface, which immobilises them and, over time, reduces their toxicity.

Researchers will even add biochar on railway embankments that have lost vegetation to examine if this encourages regrowth and prevents soil erosion. Former open cast mines will also be investigated as potential vast carbon stores, in-filled with biochar.

Dr Helen West is an environmental biologist at the University of Nottingham who will be monitoring land composition for the duration of the project. Her team will test soil and microbial health and crop yields as well as tree growth at the field sites. They will also investigate how biochar performs as a soil improver, particularly as a way to enhance organic carbon levels in soil that may been depleted due to past farming practices.

In addition to testing on their land, farmers are key stakeholders on the project. Their views are being captured on what uses and benefits they want from the biomass that would provide economic as well as environmental returns on investment.

To maximise biochar use in agriculture, the project aims to evaluate innovative ‘non-carbon’ uses that would elicit agronomic benefits over and above direct soil application. These include preventing agricultural run-off of nutrients and pesticides that can degrade water quality, reducing nitrogen losses during composting, preventing ammonia release from poultry farm buildings and increasing methane yields during anaerobic digestion (AD).

Paul Wilson, Professor of Agricultural Economics and co-investigator, said: “If the project findings are positive, the government may consider giving farmers financial incentives to add biochar to their land. This would be pertinent, particularly given the introduction of the new Environmental Land Management scheme, which pays farmers public money to make their business more sustainable.”

Support from the National Farmers Union’s – a project partner – which has a vision to drive a green revolution on British farms, making agriculture net zero by 2040, will raise awareness of the potential of biochar to help drive more sustainable farming practices

“In addition to government incentives, industries that want to achieve carbon neutrality, such as airlines, may consider paying farmers to apply biochar on their fields; in a similar way to existing tree-planting initiatives to offset carbon emissions from air travel.”

A wide range of other stakeholders will also be consulted within the project including agronomists and other significant advisors to land managers, farming and horticultural organisations both national and local, biochar producers, environmental organisations within civil society, and public health, agricultural and environmental policy makers.

Dr Carol Morris, Associate Professor of Rural Environmental Geography and co-investigator will lead the investigation, through interviews, workshops and document analysis, of how these stakeholders know and understand the environmental risks and opportunities of biochar, and how this inform their perspectives on appropriate policy interventions in relation to biochar’s ability to capture and store (also known as sequestration) carbon.

To contribute to meeting the UK’s net zero greenhouse gas emissions targets, biochar must be demonstrated to sequester carbon on long timescales (centuries or longer) and for its production to result in minimal greenhouse gas emissions. The project will quantify the financial and life cycle environmental impacts of biochar production, considering a range of feedstocks of relevance to the UK, and accounting for all stages of biochar production, its use, and the permanence of carbon sequestration.

Dr Jon McKechnie, Associate Professor in the Faculty of Engineering, said: “Waste feedstocks offer a particularly promising opportunity, where biochar production may avoid current costs and environmental impacts of waste treatment processes. We need to develop a comprehensive understanding of the costs of biochar production and its life cycle environmental impacts to identify near-term routes to deployment.”

The research team for the multi-disciplinary project, entitled Biochar Demonstrator Addressing Key Deployment Barriers for Carbon Sequestration, comprises: Nottingham, Leeds and Bangor universities, UK Centre for Ecology and Hydrology, Forest Research, and the Scottish Universities Environment Research Centre. They will be supported by project partners from the agricultural sector, biochar producers and the international biochar community.

Professor Sir Duncan Wingham, Executive Chair of the Natural Environment Research Council, part of UKRI, said: “Reducing greenhouse gas emissions is a priority for the UK, but it’s clear that alone that will not be enough to reduce CO2 and meet the UK’s net zero climate target by 2050.

“These projects will investigate how we can actively remove greenhouse gases from the atmosphere using innovative technologies at the scale required to protect our planet. This investment is especially significant as the UK prepares to host COP26 in Glasgow later this year.”

The £31.5m programme is part of the second wave of the Government’s Strategic Priorities Fund (SPF), which invests in high quality multi and interdisciplinary research.