New study reveals the most effective ways to network 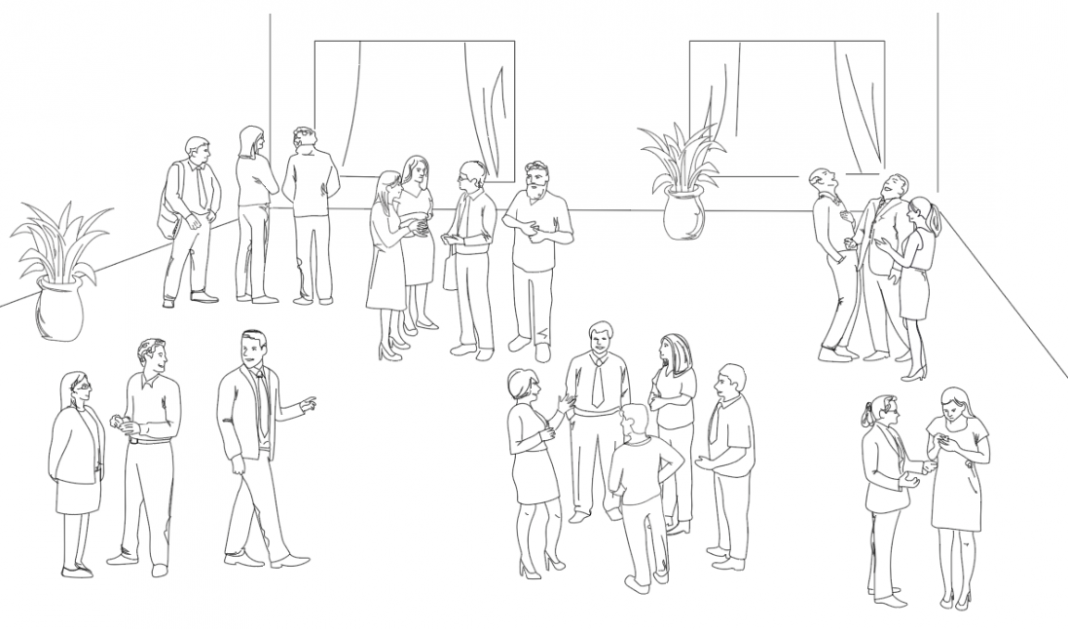 A new study by Loughborough University and Imago Venues has revealed the most and least effective ways to network at meetings and conferences.

Conversation analysts Professor Elizabeth Stokoe and Dr Magnus Hamann observed how people behave and communicate in networking spaces, and how their actions were influenced by the environment they were in and the objects that were around them.

Based on the findings of the study, they identified several research-based tips to enable people to network better. They also identified tips for conference and meeting organizers about how to set up the space and furniture.

Know where to place yourself in the room

Conference venues can be large and busy spaces and it can be difficult to know where to place yourself to network.

Start a conversation in the food/drink queue, at a standing table, or a sitting table.

The researchers found that food and drinks queues were easy to join and exit but sitting at a table locked people into a longer chat.

People often moved in pairs from the queue to a standing table to continue the conversation – or moved off in separate directions.

Put your coffee cup on a table

If networking makes you nervous, arrive at the networking area early. Get a drink and place your cup on a standing table.

The visibility of the cup creates an environment for people to interact. It invites others to place their own cups on the table to create a cluster and they start talking.

To join the conversation, you need to become part of what Adam Kendon calls an ‘interactional circle’ – a circle of people who are already networking. When they talk, people arrange their bodies so that they have equal access – gaze, hearability – to everyone in the group.

A good way of joining the circle is to position yourself in direct line of sight of the people who you want to interact with.  They are then likely to realign the circle and welcome you in.

The optimal size of an ‘interactional circle’ is 3-4 people before people break off into smaller groups.

It’s not just ‘hello’ which starts a conversation

A great way to start a conversation in the networking spaces is to approach a standing table, armed with a coffee cup or plate and ask the person already at the table, ‘Is it okay if I also put my cup down here?’

Once you get the go-ahead, you can assess whether they want to talk more. They’ll indicate this by moving their body towards you and asking you something … or not.

Don’t say hello to someone and then look over their shoulder for the ‘more important’ people in the room.

One effective thing to do is simply ask ‘where are you from?’.  The one thing that all delegates have in common is coming from an organization and a place, so start there.

Sometimes we might want to leave a conversation early – while appearing to leave on time.

One advantage of not knowing people at a conference is that you can invent a reason to leave a conversation and they’ll be none the wiser.

But the researchers observed that good exits are built from questions that imply the end of the conversation by pointing to future actions, such as “do you know where the next session is?”

Elizabeth Stokoe, Professor of Social Interaction at Loughborough University, said: “There is an overwhelming amount of information online about how to network but it isn’t always the best advice.

“The goal of networking is to have a friction-free, seamless, productive conversation that leaves your recipient(s) with a good and memorable first impression and a basis for future interaction.”

Emma Boynton, Head of Sales and Marketing at Imago Venues, said: “We know that when delegates attend conferences, they tend to find the most engagement from the networking sessions or breakout periods and not necessarily the content of the conference.

“It was important for us to commission this research to help people make the most out of those interactions but, more importantly as a venue, to raise the question of whether organisers and venues can be doing more to better facilitate great networking.

“The findings show that, with relatively minor changes to the networking environment, organisers and venues can really energise their events.”