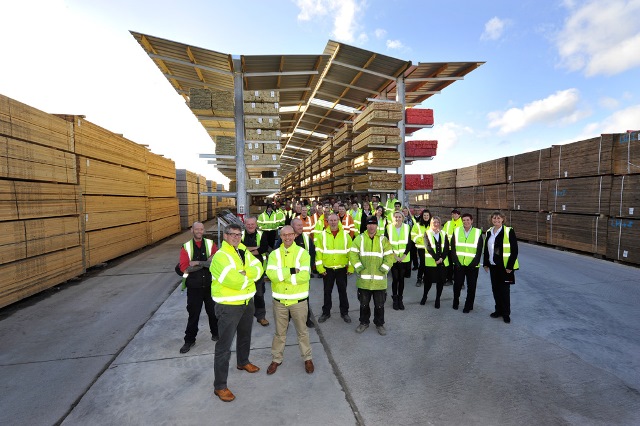 John Brash & Co. has completed the second stage of its near-£1m investment this year to improve productivity, capacity, and health and safety at its Gainsborough headquarters.

The manufacturer of graded timber roofing battens, shingles and shakes, scaffold boards, and commercial anti-slip decking has unveiled improvements to its premises in a £200,000 joint venture with its haulage partner, JME Transport. The Manchester-based haulier has part-funded work to create 60 per cent more space for the heavy goods vehicles loading up its products.

Previously, there was only enough room for nine lorries at any one time, but now the company can accommodate up to 24 lorries (eight of which can use its new loading bays) – meaning one lorry will be leaving John Brash & Co. every 30 minutes from 6am to 10pm every day.

The chairman of John Brash & Co, Christian Brash, said that the official opening of the new improvements not only demonstrated the company’s commitment to growth but also the investment underpinned in three key areas.

“It is a proud day for everyone at John Brash & Co. Ltd and JME Transport, as it is another symbol of our aspirations for growth and the commitment our business is making to ensure that we continue to be the market leader in graded timber roofing battens, shingles and shakes, scaffold boards, and commercial anti-slip decking,” said Brash.

“The single biggest benefit is that we have created more capacity in our yard through the use of more reclaimed land, as well as the more efficient configuration and better use of storage to make sure we get more lorries in and out faster.

“This, in turn, will improve the productivity of some of our logistics processes to keep up with the growth in demand for our products.

Tess Egginton - 21st February 2020
Ken Nettleship, Business Expansion Specialist at Invest in Nottingham, our host city's inward investment agency, has been announced as the guest speaker at this year's...

Brexit update: what will stay the same & what to keep...