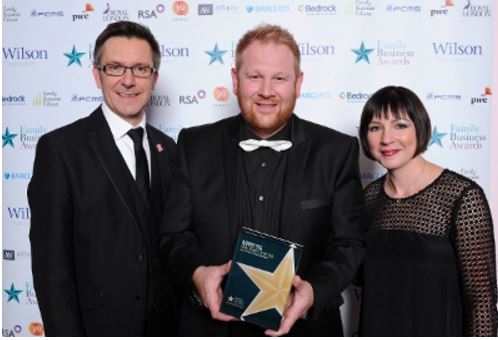 All lights are shining on Lincolnshire farming business LJ Fairburn & Son Ltd as they were championed ‘Family Business of the Year’ in the 2015 Midlands Family Business Awards.

The Fairburn team have triumphed again and this time taking the highest of accolades for firms in the region. Alford-based Fairburn’s was announced winner of the headline award at the prestigious black tie Midlands Family Business Awards Ceremony and Dinner at Leicester’s Athena. In addition, the team was highly commended in the ‘Fastest Growing Business Award’ category.

Now in its sixth year, the awards are run by third generation family business The Wilson Organisation and are the Midlands’ only independent, not-for-profit initiative to recognise and celebrate the work, achievements, innovation, operations, growth and performance of family businesses.

Judging the headline category this year were Midlands Business Insider editor Kurt Jacobs, Mark Samworth of Samworth Brothers, Annabel Prow of Wilsons, and Chris Romans of PwC. The judges praised the Fairburn family for their ambition, growth, drive and inspiration which have led the business to become one of the largest employers in Lincolnshire – and given a significant injection into the local economy.

Fairburn’s is one of the UK’s leading producers, packers and suppliers of Class A British Lion approved eggs – it markets its eggs direct to major retailers. In the last few years the tenacious team has successful secured contracts with Sainsbury’s, Aldi, ASDA, Iceland, Netto, the Co-operative, Bidvest and Costco. The enterprise has increased turnover by 500 per cent in the last 5 years. The judges highlighted that as the business has dramatically transformed and expanded, a fundamental commitment to family values remains at the heart of the Fairburn business model, operating with loyalty and integrity at every level.

Daniel Fairburn, Managing Director, attended the awards and collected the prestigious trophy. Commenting on the victory, he said: “It is a fantastic honour and outstanding achievement for my family business to be presented with the Family Business of the Year Award. With our roots firmly grounded in Lincolnshire, being able to support and contribute to our local economy and community is extremely important to us.

“We currently employ over 180 members of staff, work with local egg producers and in 2014 we purchased 17,000 tonnes of feed from Lincolnshire growers. As a family business, the investments that have been made are huge and this is why everyone is committed to the business to ensure a profitable, sustainable and fruitful business for many generations to come. Thank you for this recognition, we are all absolutely ecstatic and proud of our family.”

9th April 2020
A Nottingham law firm is increasing its opening hours in a bid to guide business and individuals through temporary changes to the immigration rules...

The REAL ‘C’ word is Communication: By Greg Simpson, founder of...