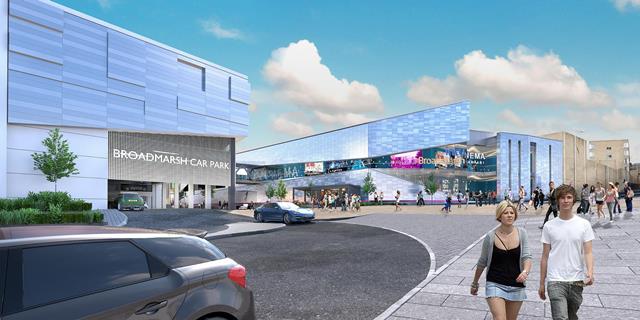 The Council says the proposals are expected to boost the local economy by over £1bn a year, create nearly 3,000 jobs for local people and attract an extra three million people a year to the city.

The plans, alongside Intu’s proposed redevelopment of Broadmarsh, Nottingham Castle’s redevelopment and the Skills Hub scheme, will, says the Council, transform the southern end of the city centre into a top-class destination for retail, leisure and education. Collectively, they represent a £250m investment in the city.

At the centre of the council’s new proposals are plans to redevelop the current Broadmarsh car park and bus station into a 21st century facility. Opportunities will be created for cafes and commercial units on the ground floor, as well as providing 1,150 improved parking spaces on the upper floors, transforming the current layout of the bus station and introducing state-of-the-art public transport information facilities to better serve thousands of bus passengers who use the station each day.

“With plans for the castle, shopping centre and a new college on the horizon, we have a once-in-a-generation opportunity to transform this part of the city, to grow the city as a whole and to boost the city centre economy by attracting millions of pounds into our retail and leisure sector and creating a significant numbers of jobs for local people.”

One year on: NTU records 63,000 positive sustainability and wellbeing actions

Tess Egginton - 27th February 2020
Nottingham Trent University (NTU) has completed over 63,000 positive actions as the University celebrates a successful first year of Green Rewards. Since the launch of...