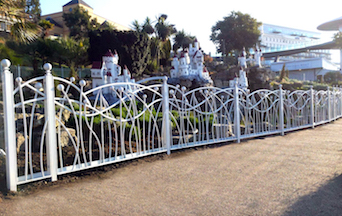 Huthwaite based metal railings and gates manufacturer Alpha Rail has recently completed the installation of decorative metal railings for a parks restoration project adjacent to Southend Pier – the location for last Friday’s episode of Jamie & Jimmy’s Friday night feast, aired on Channel 4 TV featuring Johnny Vegas cooking steaks.
Southend Pier is a major landmark in Southend-on-Sea. Extending 1.34 miles (2.16 km) into the Thames Estuary, it is the longest pleasure pier in the world.
Located close to the iconic pier, is a park known as ‘The Shrubbery’ which is itself, quite quirky, as it features miniature model castles.
Alpha Rail was provided some basic concepts by Southend on Sea Borough Council, and its team of design engineers and fabricators set about turning the drawings into a reality.
Measuring and installing the railings was quite tricky due the many varying gradients of the landscape running through the proposed fence line. In total, Alpha Rail supplied nearly half a mile of decorative metal railings, including two feature columns incorporating laser lettering of the name “The Shubbery” to provide the final touches and a stunning entrance feature to the renovated park.
The project was funded by Southend Borough Council as part of a plan to ensure the area remained a highly popular visitor attraction.
Commenting on behalf of Southend on Sea Borough Council, a spokesman said, “We all agree at the Council that the railings installed are absolutely fantastic and we are very pleased with the work that Alpha Rail has done. We feel that the railings really add visual appeal to the site.”
Phil Ball, Sales Director at Alpha Rail added “I am extremely proud of the metal railings we have installed on this project. Not only are they a truly bespoke design which have transformed the parks landscape but they have also added a level of protection as they prevent tourists from climbing on the rockery.”
Alpha Rail has been manufacturing metal railings, gates and pedestrian guardrail for over 30 years, and is proud to be one of the UK’s leading manufacturers of bespoke metalwork.
The company employs over 40 staff and relocated from Kirkby in Ashfield to a new £1m facility in Huthwaite in April 2017 which was officially opened by Gloria de Piero, Labour Party MP for Ashfield and Eastwood, Nottinghamshire.
During its 30 years of manufacturing, Alpha Rail has been proud to supply metal railings, pedestrian guardrail and gates for some high profile local and UK wide housing, parks and gardens, and infrastructure projects.
Locally these include, the A453 widening programme and the £5m project to restore the Forest Recreation Ground in Nottingham. Wider afield, Alpha Rail has been involved in many BALI award winning projects such as the £3.2m Jubilee Gardens project on the South Bank of the Thames in London as part of the Queens Diamond Jubilee celebrations as well as working on many other prestigious projects such as Hyde Park, London 2012 Olympic Games Athletes Village and the Jack Hobbs gates at the Kia Oval.