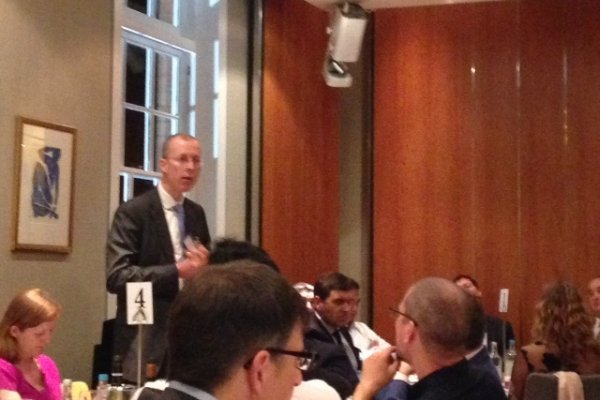 Following a premises move earlier this year and a re-defining of its business banking offering, AIB (GB)’s Nottingham office held a Celebration Dinner at Harts Restaurant, attended by some 60 representatives from its customer base and key contact list.
Staged on the evening of the 24th September, the dinner was the bank’s opportunity to recognise the support it receives from its customers and contacts and to reaffirm its commitment to the Owner Managed Business (OMB) sector in the region. Gerry McPake, who leads the AIB (GB) team in the East Midlands, welcomed the guests before dinner and set out the bank’s approach to relationship banking characterised by a deep understanding of its customers’ businesses, an appreciation of the ambitions of business owners and a desire to work with those owners, and their professional advisors, to help maximise prospects and output.

“We set ourselves high standards when it comes to serving our customers” said Gerry, “and we recognise that, in the final analysis, those customers are the ones who will determine the extent to which we deliver on those standards. Our commitment therefore is to focus, every day, on getting this right”.

In addition to the AIB (GB) East Midlands team, the bank’s senior management in the UK was represented at the dinner. Ger O’Keeffe, Head of Allied Irish Bank (GB), and Peter Slattery, from Ger’s management team, were present.

“It’s something which I think sets us apart a little”, continued Gerry “inasmuch as we can call on our senior management to come along and play a real part in events such as this. I know this is something that our customers really value”.

During the evening, Ger spoke to the group and referred to the Owner Managed Business Outlook report, recently published by AIB (GB). Under the headline ‘Optimism Reigns’, Ger underlined the importance of the OMB community in driving further growth in the UK economy. He further noted that business owners are reporting increased levels of confidence in their businesses and the broader economy, a marked improvement in both counts since AIB (GB) last spoke to them in 2014. The bank is seeing this confidence translating into increased demand for credit to support the investment and expansion plans of its customers.

AIB (GB)’s Carol Noonan added, “There’s an element of catch up going on where plans which had to be put on hold during the uncertain times are now either happening or becoming increasingly likely to happen. Whilst business owners are remaining measured in their approach to risk, they are now willing to make investments with medium and long term impacts and this in itself is a positive indication of the intentions of the sector”.