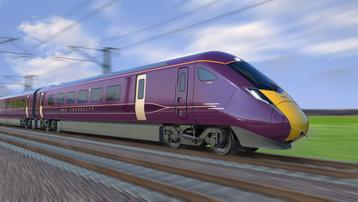 As well as improved stations, faster journey times and 40% more capacity into cities like Nottingham, the company has announced a new identity for the franchise.

Abellio introduced the East Midlands Railway brand identity yesterday (18 August), known as ‘EMR’. It has distinct purple and white branding colours that will be applied gradually onto trains, stations, websites and posters.

Further, passengers are to see faster journey times over long-distances, a new express service from Corby through Luton into London, the introduction of improved delay repay compensation and flexipass tickets to provide better value fares.

The East Midlands Railway will also be “at the forefront of the government’s commitment to deliver a cleaner, greener rail network.” Abellio will trial hydrogen fuel cell trains on the Midland Main Line and will run zero-carbon pilots at 6 stations along the route.

Abellio will also oversee the introduction of:

The takeover follows The Competition and Markets Authority’s (CMA) review of whether any competition issues arose from this award as part of its mergers work.

This investigation identified competition concerns on the Norwich and Ely and Thetford and Ely routes, as Abellio would operate both East Midlands Trains and Greater Anglia, and so provide the only services on this line. The CMA was concerned this could reduce competition, as passengers would have no other rail options, which could lead to higher fares.

After consideration, the CMA has accepted proposals from Abellio, called Undertakings in Lieu, to overcome its concerns. These measures include inflation-linked fare caps on advance fares on the Norwich to Ely route, and on all unregulated fares on the Thetford to Ely route. The operators have also agreed to maintain the availability of advance fares on both routes at existing levels. They will be required to submit regular reports to the CMA to show they are complying.

Tess Egginton - 11th February 2020
As nominations hot up, it's time to make sure that you have secured your tickets for the 2020 East Midlands Bricks Awards. A glittering awards...

Put your team in the spotlight at the 2020 East Midlands...

Make the media fall in love with you this Valentine’s Day:...

Consultation opens for up to 10 freeports across the UK