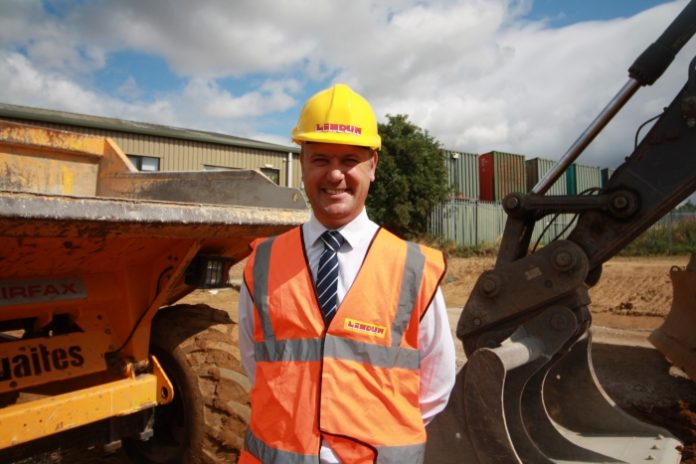 Lindum Group has appointed a long serving member of its management team to its Board of Executive Directors.

Jonathan Sizer, who joined the company as a management trainee 19 years ago, is now responsible for overseeing the activities of the Group’s 12 trading divisions and its 650 employees, from offices in Lincoln, York and Peterborough.

He will manage the new role alongside his existing job of MD at Lindum York, which is based at the Lindum Business Park in the Yorkshire village of Elvington

Jonathan, who grew up near Gainsborough, joined Lindum aged 21 following four years with Travis Perkins. There he trained as a manager before taking on responsibility for its branch at Epworth.

At Lindum, he spent time studying for a HNC and a Bsc Hons. He went on to become a Commercial Manager, before moving to Lindum Waste in Saxilby as General Manager.

He relocated to York in April 2014, shortly after the business was established there, and he has overseen its development into a £30m turnover company with 56 employees and a growing order book and reputation.

Among Lindum York’s ongoing projects are a large affordable housing development in Malton, a 120,000 sq ft industrial/logistics project in Doncaster, 130,000 sq ft of industrial/logistics in Bury, a warehouse expansion in Melmerby, new grandstand at Beverley Racecourse and the refurbishment of York University accommodation blocks.

“I’m delighted to welcome Jonathan to the Exec Board. It is always satisfying to see employees progress through the business.

“Jonathan will continue to lead our York-based business while using his expertise and knowledge to support business across the rest of the group.”

Construction is in the blood for Jonathan, whose father is a carpenter and joiner and whose grandfather was a Site Foreman for Pumphrey Construction.

He said: “I’m really pleased to have been appointed to the Exec Board and I look forward to becoming more deeply involved with the wider Group activities.

“Lindum has always created opportunities for employees and our ‘people first’ approach is what makes working here so enjoyable and rewarding.”

Tess Egginton - 10th February 2020
Yü Group's Board Director, Garry Pickering, is to take on a new role within the Group, effective immediately. Garry will now focus on the hedging,...